WOLA is a leading research and advocacy organization advancing human rights in the Americas.

WOLA's monthly digest provides highlights from our programs, including news, analysis, and stories of impact. To receive the digest in your inbox each month, please visit www.wola.org/sign_up.

The Latest News, Analysis, and Updates from WOLA

During a mid-February visit to Mexico, Pope Francis drew attention to the plight that many migrants face on their journey north. Along Mexico’s southern border, increased migration enforcement has changed the established routes and migrants have become isolated from the network of shelters that provide humanitarian assistance. Ahead of the Pope’s visit, WOLA launched a new interactive map showing that migrants traveling in Mexico’s southern border region are more vulnerable than ever. 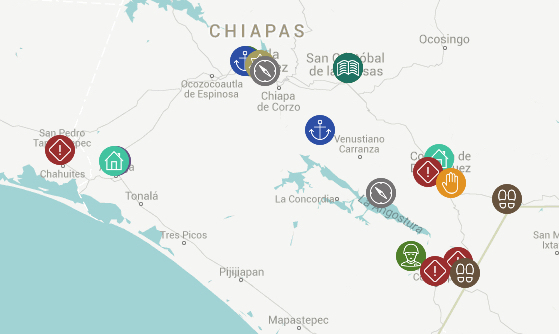 The map is a complement to WOLA’s recent report on Mexico’s southern border, which found that apprehensions of Central Americans in Mexico have risen by 71 percent since 2014. Despite the dramatic spike in apprehensions, Mexico has not increased its capacity to screen migrants for protection concerns. In fact, Mexico only granted refugee status to 21 percent of requests from January 2014 through July 2015.

Addressing the Root Causes of Migration from Central America

In December, Congress approved $750 million in aid to Central America’s Northern Triangle—El Salvador, Honduras, and Guatemala—in an attempt to address the violence, lack of opportunities, and weak governance driving migration from the region. This aid package establishes a series of strong conditions on what Central American governments have to demonstrate before funds are released, including combating corruption, strengthening institutions, and protecting human rights. As violence and insecurity in the region continues to drive migration, a recent podcast with Senior Associates Adam Isacson and Adriana Beltrán looks at the causes of insecurity and the U.S. response. In El Salvador in particular, homicides increased 70 percent last year, and now has the highest murder rate in the world. As Beltrán noted in USA Today, this violence is concentrated in certain areas, making the levels of violence there even more shocking.

The United States Plans to Support Peace in Colombia

On February 4, Colombian President Juan Manuel Santos met with President Obama to request new aid as Colombia nears a historic peace agreement. As WOLA Senior Associate Gimena Sánchez wrote in PassBlue, reconstructing a post-conflict Colombia will mean investing in women, Afro-Colombian, and indigenous populations, who all have borne the brunt of the conflict and whose participation is crucial to ensure a lasting peace.

In preparation for Santos's visit, WOLA launched an interactive data presentation that provides a detailed analysis of the U.S. aid package, Plan Colombia, which started in 2000. History shows that the military-heavy Plan Colombia was accompanied by grave human rights violations. As WOLA Senior Associates Gimena Sánchez and Adam Isacson argued on CNN’s Choque de Opiniones, the human costs of Plan Colombia were too high. The lessons from Plan Colombia are clear: future U.S. assistance should focus on rural development, justice, human rights, and support for excluded communities, including Afro-Colombian and indigenous populations.

Alternatives to Mass Incarceration of Women for Low-Level Drug Offenses

WOLA partnered with the Inter-American Commission of Women of the Organization of American States (OAS), Dejusticia, and the International Drug Policy Consortium (IDPC) to launch a new guide for policy makers on alternatives to the mass incarceration of women for drug offenses in the Americas. The report, “Women, Drug Policies, and Incarceration: A Guide to Policy Reform in Latin America and the Caribbean,” was introduced by OAS Secretary General Luis Almagro, who applauded the inclusion of a gender-based approach to drug policy reform.

Along with the report, WOLA launched two new photo essays of women incarcerated inBogotá, Colombia on low-level drug offenses, which show the societal cost of incarcerating women for petty offenses. Angela and Johana, the women featured in the essays, explain how poverty, domestic abuse, and a need to support their families drove them to participate in the drug trade.
Historic Cases from Central America in the 1980s Move Forward

Two historic cases of justice have both made rapid progress in recent weeks. A U.S. court recently approved the extradition of a Salvadoran colonel who has been indicted in Spain for his role in planning and carrying out the killing of six Jesuit priests and two women in El Salvador in 1989. The priests were well known for their work on trying to end El Salvador’s civil war, and their murders shocked the world. According to WOLA Program Director Geoff Thale, the extradition is a big step forward for justice in the case.

Meanwhile in Guatemala, a high-risk court began a landmark case trying two military officials for sexual violence, sexual slavery, and domestic violence against 15 Mayan Q’eqchi’ women at the former Sepur Zarco military base during the armed conflict in the 1980s. WOLA Senior Fellow Jo-Marie Burt was on the ground in Guatemala observing the trial, and told NPR that the fact that the case has moved forward is a historic victory for the country.
Share Tweet