This Year’s Award Will Focus on the Plight of Migrants

Today, the Washington Office on Latin America (WOLA) will present its prestigious Human Rights Awards to two recipients who exemplify the fight for social justice during challenging times. Both Ford Foundation and the Kino Border Initiative, in their different capacities, are beacons of hope, relentlessly defending human rights and human dignity.

Ford Foundation has been a visionary leader in the movement for social justice and human rights. They have helped build and sustain a vibrant, effective human rights movement throughout the world. The award will be accepted by Ford Foundation President Darren Walker.

Kino Border Initiative is a migrant shelter that conducts courageous work on the U.S.-Mexico border, providing humanitarian aid to migrants and advocating for more humane policies. At a time when intolerance is increasingly influencing how various governments deal with immigration issues, Kino Border Initiative serves as a champion for a more compassionate approach and provides a lifeline for migrants in their moments of greatest need. The award will be accepted by Kino Border Initiative Executive Director Father Sean Carroll.

“Both Ford Foundation and Kino Border Initiative, in their different capacities, are beacons of hope, courageously defending human rights in perilous times,” said WOLA Executive Director Matt Clausen. “At a time when values like justice and human dignity are facing unprecedented threats, honoring the work of organizations like these is more important than ever.”

Maria Hinojosa, the host and executive producer of Latino USA and founder of The Futuro Media Group, will serve as the Gala’s Master of Ceremonies. Attendees include policymakers and prominent leaders in the non-profit, media, and business sectors.

“It is an honor to accept this award from the Washington Office of Latin America and a tribute to the courageous grantees we are privileged to support,” said Darren Walker, president of the Ford Foundation. “Protecting human rights is impossible without addressing underlying systemic inequalities and lifting up the voices of those most affected. WOLA has been, and continues to be, an incredibly strong partner to our commitment to human rights in Latin America.”

“We are humbled and grateful for this great recognition of our binational work on the issue of migration along the U.S.-Mexico border,” said Kino Border Initiative Executive Director Father Sean Carroll. “Over the years, we and the Washington Office on Latin America have worked together to dispel myths about U.S.-Mexico border security and to document concretely abuses against migrants and refugees in Mexico. With complementary strengths, we have achieved much, while we know there is still so much left to do.” 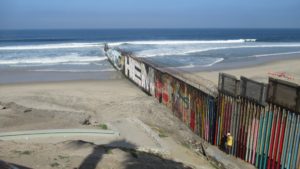