In recent years, Mexican civil society has led a historic push for reforms meant to strengthen the role of public prosecutor’s offices in combating violence, corruption, and impunity. A large part of this push has involved reforms designed to guarantee the autonomy of prosecutors—an effort to reduce political influence over sensitive criminal investigations. The federal government and all but four of Mexico’s 32 states have completed or initiated a transition from an attorney general’s office to an autonomous prosecutor’s office separate from the executive branch.

But the need for reform goes beyond autonomy. Prosecutor’s offices across the country are under-resourced and understaffed. Many prosecutors, police, and forensics experts lack training and guidelines on how to prioritize cases, investigate complex crimes, handle sensitive evidence, and properly tend to victims. In most cases, these transitions have done little to address the underlying structural and bureaucratic inefficiencies that have allowed impunity and public mistrust in the criminal justice system to flourish.

The Mexico City experience, however, is one to watch. The capital has employed a unique, innovative approach focused on rebuilding the city’s prosecutor’s office from the ground up. Below, we analyze the Mexico City model, lay out next steps for ensuring a successful transition, and make a case for why other states should take similar steps to guarantee the full autonomy and optimal efficiency of their prosecutor’s offices.

What is perhaps most unique about the Mexico City model is the legal mandate given to civil society to lead the city’s transition toward a new and improved prosecutor’s office. After 2016 political reforms established Mexico City as a federal entity on par with Mexico’s other 31 states, a new local constitution entered into force in September 2018. A transitory article in the constitution mandated that the local Congress would have to select a “Technical Commission” made up of seven civil society leaders to design a proposal for how to complete the city’s transition toward an autonomous prosecutor’s office. Congress selected these experts in November 2018. Each of the selected commissioners are respected leaders in the fields of human rights, law, and criminal justice.

Main Goals for the Transition

After spending over half a year visiting the prosecutor’s office facilities and interviewing victims, public officials, and experts, the Commission found several key structural and investigative shortcomings. With these findings, the experts drafted a proposed “Implementing Law” (Ley Orgánica)—the document that will define the structure and function of the new autonomous Mexico City Prosecutor’s Office. The main goals outlined in the draft law include:

The Technical Commission presented the law proposal to Mexico City’s Congress on September 30. Congress is scheduled to begin debating the draft during the last week of November. According to Mexico City’s constitution, the Implementing Law is supposed to enter into force by December 5. It is important that the final law passed by Congress takes into account the Technical Commission’s recommendations.

Mexico City’s constitution originally prohibited anyone who had held an elected office or a leadership post within a political party within the past three years from being selected as the first autonomous general prosecutor. On October 22, the MORENA party and its allies in the local Congress voted to reduce this requirement from three years to one.

This has raised concerns that the Congress passed the reform specifically to allow the current general prosecutor, Ernestina Godoy, to remain in her post throughout the transition. Godoy served as a congresswoman for MORENA in Mexico City’s Congress until November 2018 and is a close ally to Mexico City’s mayor, Claudia Sheinbaum.

Eleven candidates have submitted their names to become the head of the new prosecutor’s office. From this list, the Citizen Judiciary Council—a group of 11 civil society leaders selected by the local Congress—will choose a select few names to send to Mayor Sheinbaum, who will send one name back to the Congress for a final evaluation and vote.

All parties involved should work to ensure that the selected candidate is qualified and dedicated to leading the new institution with complete autonomy, honesty, and the utmost respect for human rights and the rule of law.

The new prosecutor’s office is supposed to begin operations by January 10, 2020. The Technical Commission estimates that the transition will take four years to roll out. According to Ulises Lara, the spokesperson for the current prosecutor’s office, implementing the new institution is expected to cost 4 million pesos, 2 million of which are needed in the first four years of the transition. The Mexico City Congress must appropriate these funds to ensure a prompt, complete, and successful transition.

In the coming months, the content of the final Implementing Law, the credibility of the nomination process of the first autonomous general prosecutor, and the amount of funds allocated to the new institution will determine whether this important transition is on the right track.

If completed effectively, the Mexico City transition toward an autonomous prosecutor’s office could serve as a strong model for other states to follow as they look to reform their law enforcement institutions. The Mexico City experience has proved that civil society participation in such reforms is critical to guaranteeing that the needs of victims and the general public are at the center of the debate. As public officials work to fully implement the new office going forward, they must continue to allow for strong civil society input and oversight. 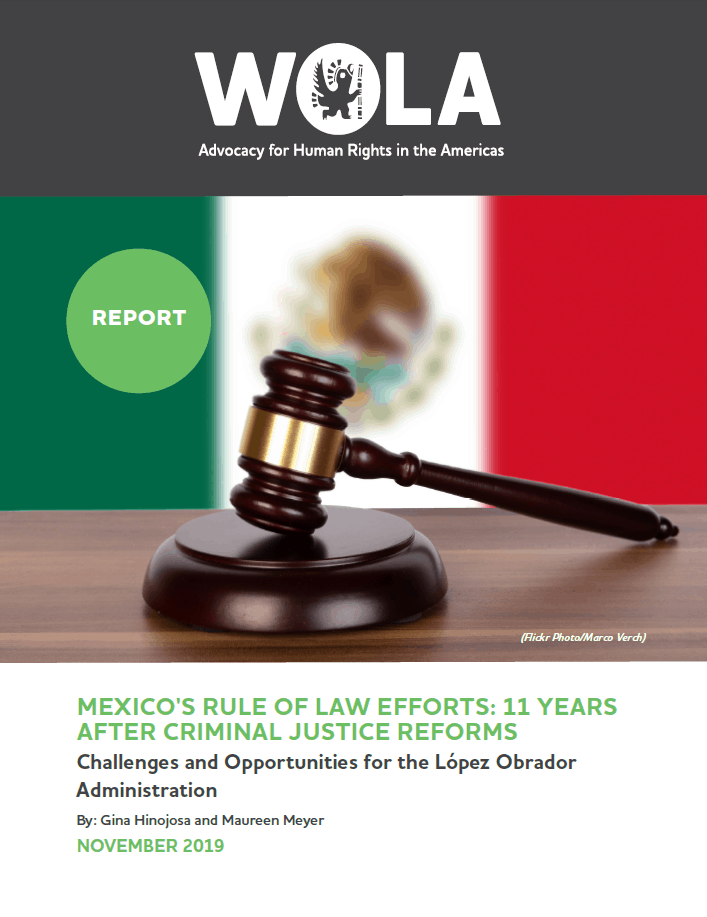