Every year, WOLA honors organizations or individuals who have worked tirelessly to promote human rights, democracy, and social justice in Latin America. Our awardees are organizations or individuals who exemplify a commitment to WOLA’s vision for the future, where human rights and social justice are the foundation for public policy.

The Ethnic Working Group of Colombia’s Truth Commission
– who, despite immense personal danger and risk, are working to establish the truth of what Afro-Colombian and Indigenous communities experienced during Colombia’s armed conflict.

Congresswoman Barbara Lee
– for her career of bold and pioneering leadership promoting peace, social justice and human rights throughout the Americas.

Fundación Mi Sangre
– for their commitment and leadership in lifting up new generations that are committed to a culture of peace in Colombia.

Fray Matías de Córdova Human Rights Center
– for their commitment to supporting, protecting, and defending migrants, asylum applicants, refugees and their families on the Mexico-Guatemala border.

Congresswoman Veronica Escobar
– for her leadership in restoring the human rights of asylum seekers at a time when the treatment of this population is anything but humane and dignified. Efecto Cocuyo, Independent News Source
– for their vital journalism of Venezuela in crisis and their courageous defense of democracy.

Congresswoman Norma Torres
– for her visionary leadership in Congress on behalf of human rights and justice in Central America. 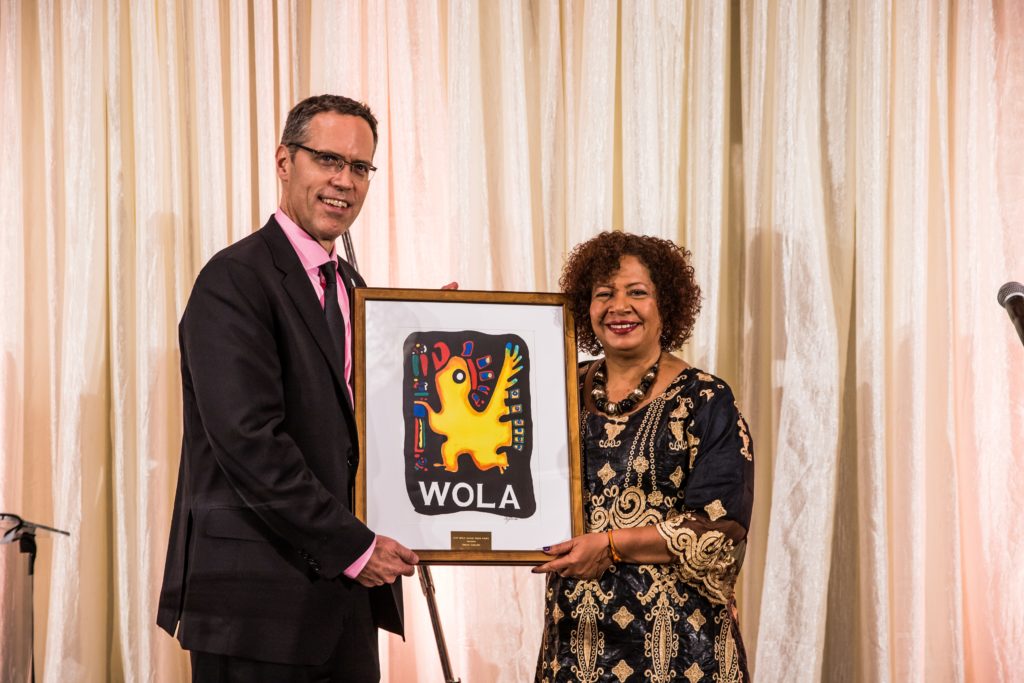 Iván Velásquez Gómez, Commissioner, International Commission Against Impunity in Guatemala (CICIG)
– for his courageous leadership as head of the CICIG, a unique UN-backed agency working with Guatemalans to investigate and dismantle entrenched criminal networks.

Joe Eldridge & Maria Otero
– for their pioneering contributions to human rights in the Americas and their lifelong commitment to supporting the human rights community.

Thelma Aldana, Former Attorney General of Guatemala
– for her determined prosecution of the corrupt and powerful and her commitment to expanding justice to all Guatemalans.

Ford Foundation
– for its visionary leadership in the movement for social justice and human rights.

Kino Border Initiative
– for their courageous work on the U.S.-Mexico border, providing humanitarian aid to migrants and advocating for more humane policies.

“Both Ford Foundation and Kino Border Initiative, in their different capacities, are beacons of hope, courageously defending human rights in perilous times,” said WOLA President Matt Clausen of our 2017 honorees. “At a time when values like justice and human dignity are facing unprecedented threats, honoring the work of organizations like these is more important than ever.” 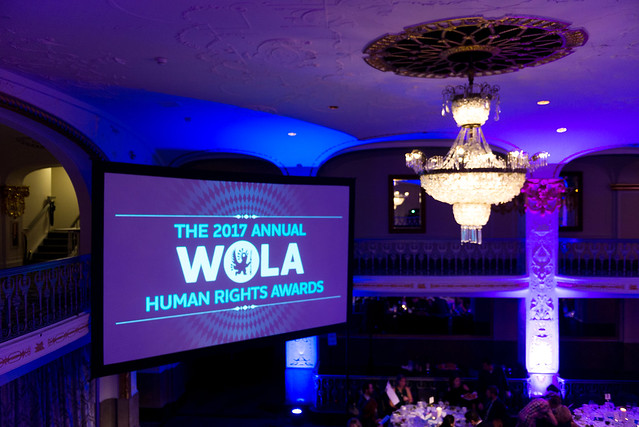 Bill & Paula Clapp, Founders of Seattle International Foundation
– for their visionary and catalytic commitment to human rights and economic development in Central America

Casa Alianza de Honduras
– for their critical and courageous work to protect children and adolescents at risk in Honduras.

At a time when more Central Americans are fleeing their home countries, WOLA’s 2016 Human Rights Awards focused on the urgent need to address the root causes of migration from the region—namely the high levels of violence, poverty, corruption, and impunity that plague Central America—as well as the need to expand access to protection for migrants who could qualify for asylum in Mexico and the United States. See below to watch the night’s program and see pictures from the event. 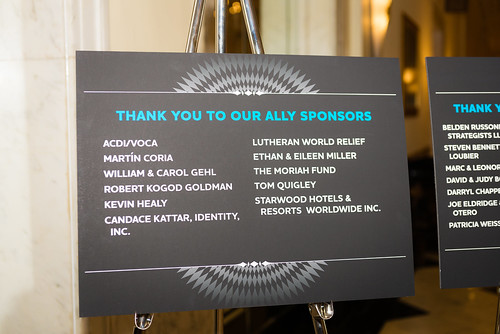 Justicia y Paz, the Inter-Church Commission for Justice and Peace in Colombia
– for playing a key role in working for peace and supporting victims of the violence and displacement

Tim Rieser, Foreign Policy Aide to Senator Patrick Leahy (D-VT)
– for his commitment to human rights during his 30 years working in Congress 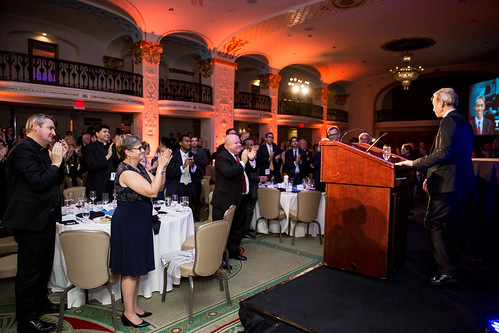 U.S. Senator Tom Harkin
-for his 40 years of congressional leadership on human rights in Latin America

Ambassador Milton Romani Gerner
–for pioneering the search for effective, human rights-respecting alternatives to the failed war on drugs

On October 24, 2013, the Washington Office on Latin America (WOLA) held its annual Human Rights Awards Ceremony and Benefit Gala at the French Embassy in Washington, D.C. The WOLA Human Rights Award is an opportunity to honor inspiring people for their deep commitment to human rights and social justice in Latin America. To see highlights from the evening, please click here. To see photos of the event, please click here or scroll to the bottom of the page. The event was highlighted in the February, 2014 issue of Washington Life Magazine, which can be seen here.

On September 19, 2012, WOLA awarded its sixth annual Human Rights Awards as part of its Human Rights Awards Ceremony and Benefit Gala, which took place at the Maison Francais in Washington, DC. The evening, based around the theme “Overcoming Violence: The New Human Rights Agenda,” celebrated the innovative work done by our honorees to address the growing rates of violence in their communities

Ambulante Film Festival
– for using documentaries as a tool for change.

The Education Corporation for Costa Rican Development (CEDECO)
– for promoting a successful and climate-smart economic model for small-scale farmers in Central America.

AFRODES: Association of Internally Displaced Colombians
– for its defense and promotion of human rights in Colombia.

Michelle Bachelet, Former President of Chile
– for her sustained and invaluable leadership on human rights in Latin America.

Tlachinollan Human Rights Center of Mexico
– for their courageous work to address the grave human rights violations of the vulnerable and marginalized indigenous populations in the state of Guerrero.

U.S. Senator Christopher J. Dodd
– for his leadership role on Latin American issues throughout his tenure in the Congress.

The University of Central America (UCA), El Salvador
– for its consistent and effective work to end human rights abuses and impunity over two decades.

U.S. Congressman James P. McGovern
– for for his defense of human rights in Colombia and his work to provide funding for economic and social needs over
military assistance.

Mercedes Doretti, Argentine Forensic Anthropology Team
– for its contribution to the search for truth, justice, and prevention of and reparation for human rights violations.

Fredy Peccerelli, Forensic Anthropology Team of Guatemala
– for their efforts to provide answers and solace to thousands of families of the disappeared in Guatemala.