A Firsthand Look at the Emerging Self-Employed Sector in Havana

WOLA’s Cuba team recently returned from a trip to the island to learn about changes in the Cuban economy.  Here, Program Officer Ashley Morse reports back from a walking tour of downtown Havana where the WOLA team saw up close on the streets the emergence of a modest but formal self-employed sector. 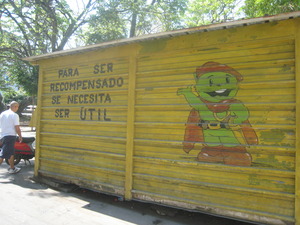 On the side of a prefabricated shed in a working-class neighborhood in downtown Havana a heroic cartoon figure proclaims “To get paid, you need to be useful.” Through a façade you can’t see the shed opens up to the street and inside there is a row of BB guns chained to a countertop and at the end a series of foil-wrapped targets hanging from the ceiling.  This cobbled-together “shooting range” is one of many new private businesses popping up that have been approved as part of the economic changes being pushed forward by the Cuban government under the leadership of Raul Castro.

Since assuming leadership of Cuba in 2006, Raul has been pushing for modest economic reforms that he hopes can revive Cuba’s moribund economy. These changes will focus on increasing efficiencies, reducing subsidies, and strengthening the private sector, leading Cuba toward a more mixed, though still state-led economy.

The jumpstart for the private sector is illustrated by the announcement last year that Cubans can go into business for themselves in nearly 200 pre-approved enterprises.   This announcement, along with other new economic measures, was formally ratified at a Communist Party Congress, which took place just before our visit.  Entrepreneurs can hire their own employees, now including employees outside their immediate family, and rent or sell their cars and homes.

In addition, the Cuban government has proposed  laying off up to half a million state workers, a major shakeup for the island with an economically active population of over 5 million and 80-90% (estimates vary) of those workers on the government’s payroll.  The timeline for these lay offs is not completely clear.  Opposition, by bureaucrats, but also by workers, has clearly led the government to reconsider how quickly it will carry out the lay offs, though we visited workplaces where the lay-off process had begun.

The layoffs will concentrate on cutting jobs considered “redundant” or where workers do not have enough work to fill the full 8 hour work day.  If these layoffs take place at the predicted scale it will be a major culture shift for Cubans – who are accustomed to having their protections and needs met by the government – when the government is no longer able to provide them with jobs. Some of these workers may opt to pursue a different state job or work in the agricultural sector where there are new economic opportunities, but many may find themselves being pushed out of the system and forced to find their way in private businesses.  On our walk through Old Havana, we took a look at this sector. 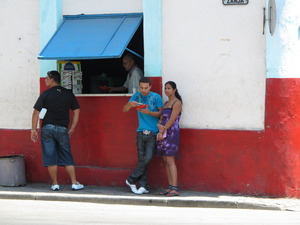 One of the state-provided services  that the government is cutting back  are the state-run cafeterias that provide free lunch for Cuban workers.  Cubans we spoke to on our visit said they were initially nervous about not having a place to eat when their dependable, state-owned cafeteria closed, but most have been pleasantly surprised at the number of new options opening.  As seen here, many private entrepreneurs, particularly those lucky enough to own street-level property in a bustling business area, have begun to sell home-made hot plates out of their windows at lunch time. 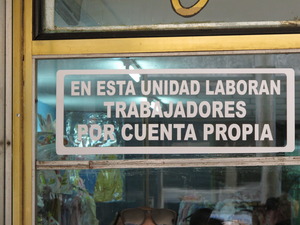 “This store is run by self-employed workers”, reads a sign on the window of a used clothing store. 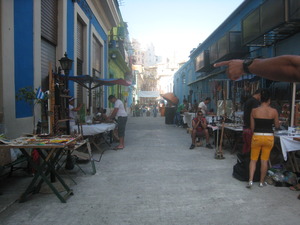 Streets like this one have been approved for private businesses to open shop.  This street and others like it, display modest attempts to set up small retail “stores”. 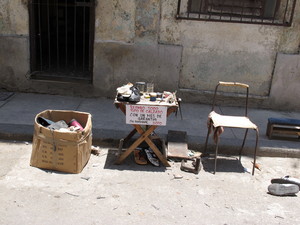 A business' sign reads “I repair any kind of shoes, one month guarantee” 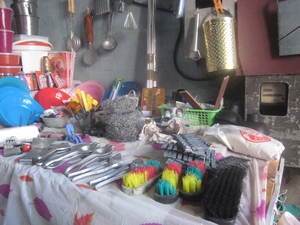 As this picture illustrates, (where a vendor sells scrub brushes, citrus presses, clothes pins, etc.) these private enterprises are modest initial attempts at self-employment but will not be enough to fully employ the slated 25% of the workforce the government intends to move to privatized jobs.  On the one hand it is an exciting time, when one can image Smith’s Invisible Hand grabbing up this table and five others like it into a small hardware store.  On the other hand, this image makes clear that the government will need to do more to create meaningful employment in the Cuban economy.

In the short term the government will have to concentrate on how to get Cuban workers into the sectors that are growing domestically.  Agriculture is one important sector.  The government wants to reinvigorate its idle lands and make them produce to provide for the island’s food needs.  However, at present the government intends to rent the land, rather than give it away, which limits incentive for workers when making the choice whether to relocate their families to more remote areas in the hopes of establishing rural livelihoods on rented land that might be taken back by the government.  The government will also have to consider how it can stimulate production through microcredit and training for these small producers that will incorporate them into a strategic supply chain.

The government will also need to open up to foreign investment to create meaningful employment.  Cuba’s off-shore drilling is one sector to watch in the coming months.  If Cuba strikes big in oil, foreign investors will be eager to come in to help with infrastructure and production and if Cuba plays its cards right this could result in the creation of serious gainful employment for its workers.

All these changes underway are uncharted territory for the Cuban government and the Cuban people.  They are reminiscent of the structural reforms of other Communist nations like the People’s Republic of China or Vietnam, but they are likely to follow a uniquely Cuban path.  This is a watershed moment in Cuba’s history, and one to keep an eye on as it progresses.

The OAS Should Respect the IACHR’s Independence and Autonomy

Challenges and Tools for Latin America’s Struggle for Equality

Opinion: Latin America’s Next Generation of Authoritarians is Using COVID-19 to Consolidate Power