WOLA’s Internship Program is named in honor of Sally Yudelman for her commitment and contribution to WOLA and the cause of social justice. Following Sally’s example, we hope to provide unique mentoring opportunities through internships, encouraging the next generation of young people to get involved in advocating for human rights in Latin America. Our former interns can be found around the world working as human rights advocates, congressional aides, lawyers, journalists, professors, and even as members of WOLA’s senior staff.

Every semester, WOLA’s new interns are paired with staff mentors and absorbed into the work of the organization. They collaborate on a mix of research, analytical, and administrative work, and they are encouraged to get involved in the day-to-day activities of their teams.

WOLA selects three interns per session (Spring, Summer, and Fall), and each intern is assigned to work with a mixture of programs from the following; communications, Venezuela, Colombia, Central America, Defense Oversight, and a variety of policy programs. Interns also participate in the behind-the-scenes work of running a non-profit organization, including helping with technology, media, finance, and event planning. To learn more, click here.

For a look at former interns’ contributions to WOLA and personal reflections on the Yudelman Program, check out:

Development interns assist with various aspects of fundraising and institutional development, including event logistics and planning, database management, mail and email campaigns, grant writing, and other responsibilities as part of the fundraising team. Interns will learn about donor cultivation and stewardship and prospect research. The position provides a hands-on experience in development and assures broad exposure to each of WOLA’s different program areas. Fundraising internships will give students experience in the art of communicating WOLA’s mission and work to our broad base of supporters, and are ideally suited for students interested in non-profit management or philanthropy—in addition to human rights and Latin America. Experience with event planning and administration, fundraising, or database management is a plus.

Communications interns assist with social media, WOLA’s website, content development, press relationships, video filming and editing, and a variety of other responsibilities as a part of the communications team. The position provides a unique look at the intersection of strategic communications, social media, press work, and the promotion of human rights in Latin America. Communications internships will give students experience in turning compelling stories into action by articulating WOLA’s mission and work for different target audiences, and are ideally suited for students interested in journalism, content production, strategic communications, or marketing—in addition to human rights and Latin America. Experience with digital software, press work, graphic design, and multimedia is a plus.

Policy interns are each assigned to a specific programmatic area or a mixture of them at WOLA (Citizen Security, Colombia, Cuba, Drug Policy/Women's Incarceration, Mexico, Border Security, and Venezuela). Not every program has an intern every semester. Within each program, interns take on a wide range of responsibilities; on any given day, an intern might attend a hearing on Capitol Hill while another translates a press release and another conducts research for a memo. The position includes immersion into one of WOLA’s program teams, and offers students first-hand experience in the research, strategy, and development of human rights advocacy. Policy interns are ideally suited for students interested in international relations, foreign policy, or political science—in addition to human rights and Latin America. Experience with translation, technical writing, and research is a plus.

The Spring 2022 internship will be entirely remote. Interns are paid $18 an hour and are required to work between 20-25 hours per week. We offer an academically and professional enriching environment for interns to learn and grow. WOLA is willing to work with students to arrange for university credit.

Interested applicants should have a demonstrated interest in human rights, democracy, and social justice in Latin America; initiative and flexibility; the ability to work in a fast-paced environment; good organizational skills; follow-through; and attention to detail. Motivated, self-starting interns excel at WOLA. A minimum of intermediate-advanced Spanish proficiency is required. Intermediate Portuguese language abilities and technical skills are highly desired. In general, the Yudelman Internship Program is not open to students who have passed beyond their undergraduate studies due to its significant administrative component.

WOLA values a diverse workplace, and encourages minority candidates to apply. WOLA is an equal opportunity employer, and does not discriminate based upon race, color, creed, national origin, sex, age, disability, marital status, sexual orientation, prior record of arrest or conviction, or caregiver status. WOLA does not sponsor visas for students outside of the United States.

In order to be considered for an internship, WOLA needs the following materials:

2) Cover letter in which you state:

3) Writing samples in English and Spanish on a topic of your choice (no more than 2 pages each).

Please submit all application materials via email to Cayla Spear at [email protected].

November 15th: Spring Internship (mid-January through May), selections will be made in early December.

February 31st: Summer Internship (Early June through August), selections will be made in mid April.

June 13th: Fall Internship (late August through December), selections will be made in late June.

**If you require an earlier deadline due to university funding or credit, please include the date in the subject line of your email**

WOLA is where I realized human rights is definitely my field. As a work-space, WOLA allowed me to understand that fighting for human rights is a daily battle. Being around such passionate individuals and experts inspired me to become an active advocate for minority groups in my island, Puerto Rico.

My experience at WOLA has been the beginning of a long journey towards justice. 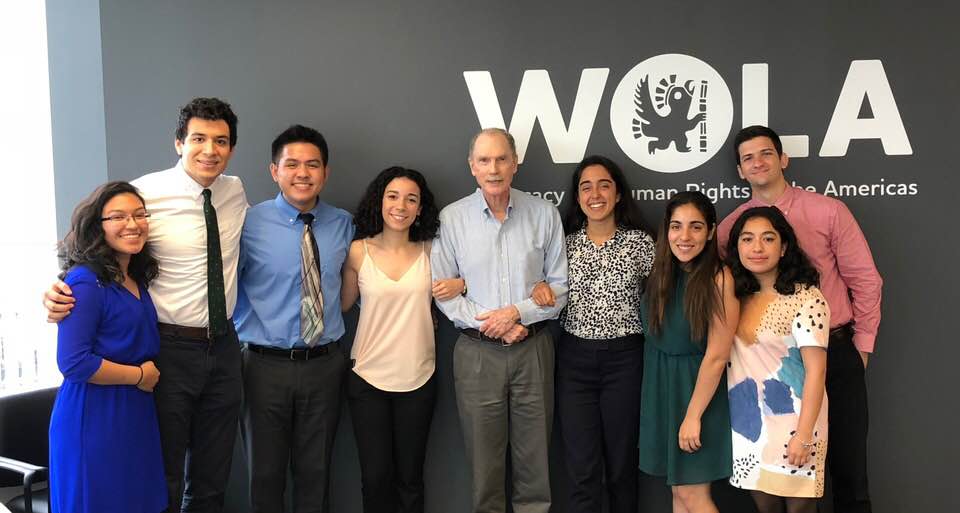