Washington, D.C. and Cochabamba, Bolivia—Bolivia has seen a decline in coca cultivation for the fourth consecutive year, according to data released today by the United Nations Office on Drugs and Crime (UNODC). An analysis of this data by the Washington Office on Latin America (WOLA) and the Andean Information Network (AIN) reveals that the country’s coca policy—which relies on “cooperative coca reduction” rather than forced eradication—is responsible for the drop.Coca cultivation in 2014 is estimated to be 20,400 hectares, the lowest level in over a decade.

The WOLA-AIN report, “Building on Progress,” shows that coca cultivation in Bolivia has dropped 34 percent from 2010 to 2014.  It also finds that economic development, cooperation with coca-growing communities, and respect for human rights have been the main drivers of these consistent reductions. This experience holds key lessons for Peru and Colombia, the two leading global coca producers, which continue to use forced eradication campaigns despite the harms they cause and their ineffectiveness at ensuring lasting coca reductions.

“Bolivia’s successes send a clear message: forced eradication of coca is neither effective nor just, and leads only to cycles of poverty and human rights violations—not sustained reductions in coca cultivation,” said Coletta A. Youngers, a Senior Fellow at WOLA and co-author of the report. “By working to provide economic alternatives for coca growers and permitting small amounts of cultivation for traditional use, Bolivia has reduced the supply of coca deviated to the illicit market.” 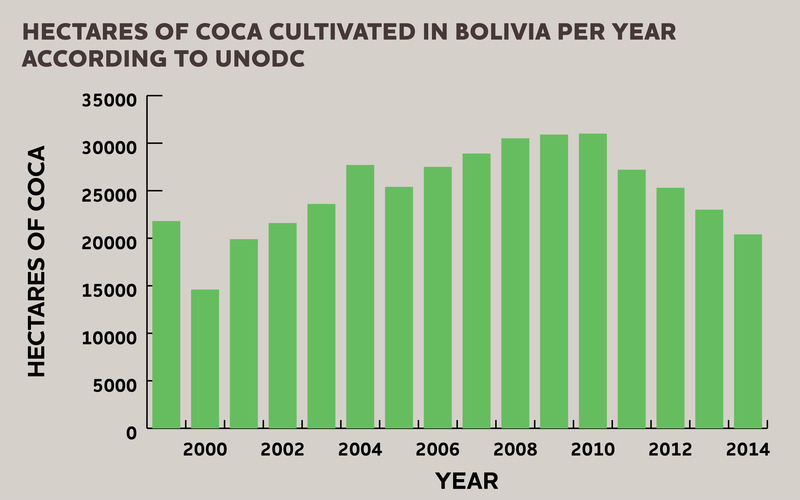 Bolivia’s program relies on close monitoring to ensure individual cultivators do not exceed theircato, or measured plot of land for permitted coca cultivation. Farmers participate in a biometric registry to facilitate identification and monitoring of production, transport, and sales, effectively ensuring crops are only used for licit products—not cocaine or its derivatives.

At 20,400 hectares of coca under cultivation, Bolivia has nearly reached its goal of 20,000 hectares, the amount considered to be sufficient to supply the traditional and expanding legal markets.
Yet while Bolivia’s coca policy is worthy of recognition, the report concludes that the country’s outdated drug law remains unjust and continues to rely on disproportionate punishment for low-level, non-violent drug offenses.

“Sentences for non-violent drug offenses remain disproportionately high—with prison terms rivaling those for homicide,” said Kathryn Ledebur, Executive Director of AIN and the report’s co-author. “Legal reforms currently under review will be essential to ensure that Bolivia’s drug laws are as just as its coca policy. Success will hinge on the implementation of alternatives to incarceration for low-level offenders and the redirection of scarce law enforcement resources to dismantling criminal drug networks.”