Dangers of U.S. Demand for Harsh Policies and Mexico’s Failure to Ensure Protection

Washington, D.C.—When President Donald Trump demanded that Mexico “stop” migrants from reaching the U.S.-Mexico border or else face tariffs, the ensuing crackdown by Mexican authorities had dramatic consequences for the human rights and safety of migrants and asylum seekers, according to a new report by research and advocacy group the Washington Office on Latin America (WOLA).

Read the key findings of the report

Following the tariff threats, the Mexican government’s detention of migrants reached record highs and the number of migrants seeking asylum in Mexico skyrocketed. Meanwhile, the Mexican government’s failure to provide its under-resourced asylum system adequate support has left it on the verge of collapse. At the same time, the migration crackdown has forced migrants to travel through more remote and dangerous areas, fostered hellish conditions in detention centers, and pushed Mexico’s new National Guard force into a role it is unprepared to play.

The new WOLA report, The “Wall” Before the Wall: Mexico’s Crackdown on Migration at its Southern Border, examines the impact of Mexico’s crackdown by focusing on its southern border with Guatemala. The findings are drawn from travel by WOLA’s border and migration staff along 400 miles of this border zone, where they interviewed government officials, migrant shelter workers, and others working firsthand on the government-provoked security and migration crisis at Mexico’s “other” border.

“Mexico’s government may win the Trump administration’s favor by detaining and deporting record numbers of people, but it loses ground to criminal groups who exploit fearful migrants,” said Adam Isacson, WOLA Director for Defense Oversight. “For human smugglers, these punitive policies are just a speed bump: they’re not going out of business. Meanwhile, shelters and detention centers are overwhelmed and the problems driving families to flee remain in place. The Mexican government should abandon these disastrous measures before the human costs grow further,” said Isacson.

Mexican authorities detained some 169,932 migrants between January and October this year, up 50 percent from the same period in 2018. Over 31,000 migrants were apprehended in June, just after President Trump’s threats of tariffs—a record high in monthly apprehensions not seen since public record keeping began 2001. Detentions and deportations of citizens from Northern Triangle countries (El Salvador, Honduras, and Guatemala), Cuba, Nicaragua, and Haiti have skyrocketed compared to 2018—often by percentage rates in the hundreds or thousands.

But as the Mexican government complies with the Trump administration’s demands for more punitive migration enforcement, its asylum system is being pushed to the brink. Mexico is on track to end 2019 with over 70,000 asylum requests, an increase of over 125 percent compared to last year. The vast majority of these claims are being made in Chiapas, Mexico’s poorest state, where 21 asylum caseworkers on staff reportedly handle about 1,300 cases each. While the United Nations High Commissioner for Refugees (UNHCR) is providing significant financial and technical support to Mexico’s asylum system, the Mexican federal government only approved a third of the national refugee agency’s requested budget for 2020.

“Although Mexico has seen a record number of asylum requests, its asylum system has not kept up with the surge, and migration agents often fail to inform detained migrants of their right to seek asylum,” said Maureen Meyer, WOLA Director for Mexico and Migrant Rights. “As a result, those with legitimate claims to protection are facing a high risk of either being deported back to life-threatening situations or having to endure months of uncertainty and hardship while Mexico processes their claims.”

WOLA’s report goes on to describe other ways in which the Mexican government’s focus on detentions and deportations is exposing migrants and asylum seekers to greater risks and increased suffering. For now, the deployment of the National Guard appears to have shifted migration routes to areas where migrants are more likely to fall prey to criminal groups and corrupt officials: while once-busy corridors adjacent to Mexico’s Pacific and Gulf coasts are seeing less travel, smugglers continue to operate robustly in a “central” corridor cutting through rural, mountainous terrain. Migrants continue to suffer assault, robbery, rape, and kidnapping at the hands of criminal groups throughout the southern border zone, and the majority of these cases remain unpunished.

As part of the increased enforcement efforts, Mexico has deployed some 12,000 members of its new National Guard force to the southern border; but because most of them come from the Mexican armed forces with little or no training to manage migration flows, migrants and asylum seekers may be vulnerable to abuse. Another effect of the crackdown can be seen in Mexico’s bursting detention centers: in August, facilities were housing on average 61 percent more migrants than they were meant to hold, with some places operating 300 percent over capacity.

“Instead of protecting those who may be fleeing violence and government persecution, the Mexican government’s ‘enforcement first’ approach is imperiling them,” said Meyer. “Both Mexican and U.S. authorities should uphold their humanitarian obligations and strengthen asylum procedures, rather than pursue migration crackdowns that expose people to danger and do nothing to change the underlying causes of migration.” 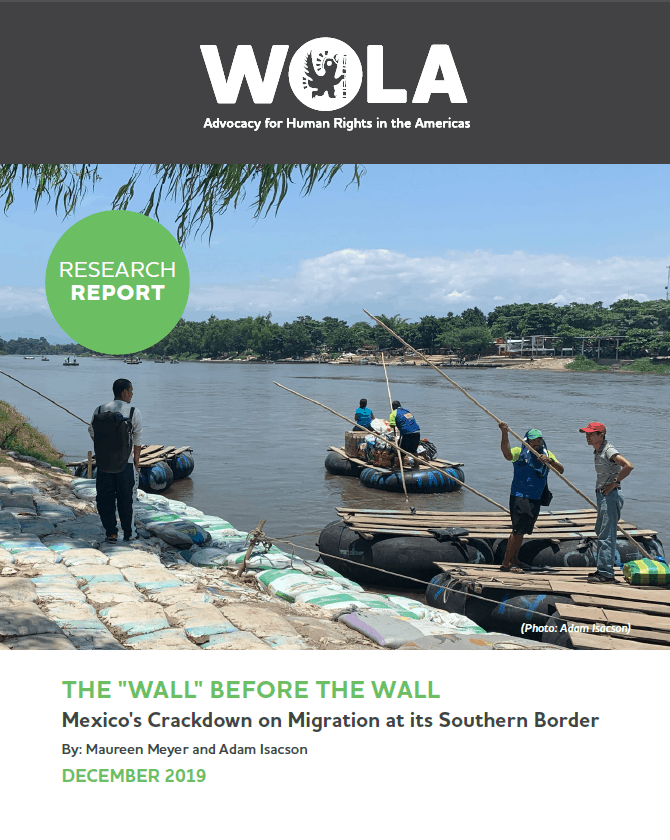