This article is republished from The Conversation under a Creative Commons license. Read the original article.

Even in a country where crisis has become the norm, the past month has been eventful.

On April 3 Juan Guaidó, the Venezuelan National Assembly president who is leading an effort to remove President Nicolás Maduro from office, was stripped of his parliamentary immunity. Arrest seems increasingly likely. Guaidó’s chief-of-staff was jailed on March 22, on charges of organizing a “terrorist cell.”

Meanwhile, three blackouts left over 90 percent of the country in the dark. Since water pumps need electricity to run, neighborhoods and families were forced to organize water rationing systems or fetch water from polluted rivers and streams.

Maduro blames the blackouts on “sabotage” by Guaidó and the United States. The opposition blames government corruption and neglect of Venezuela’s energy grid.

U.S. economic sanctions — which are now targeting Venezuelan oil — appear to be hurting the Venezuelan people more than Maduro’s government.

Thousands of Venezuelans protesting the power outages on March 30 were met with violent repression. Counter-protestors came out to support the Maduro government.

These extraordinary events may give the appearance that armed conflict is on the horizon. But having researched Venezuela for over 25 years, I believe a prolonged deadlock – and deeper human suffering – is the more likely result.

Each side in Venezuela’s political struggle has powerful international backers.

Guaidó has been coordinating with the Trump administration since before assuming the interim presidency, and Trump has made regime change in Venezuela a foreign policy priority. Over 50 countries now recognize Guaidó as Venezuela’s legitimate president.

Maduro’s government retains important support from Cuba, Turkey and China — though China, which has loaned Venezuela some $60 billion over the last 12 years, has diminished its public backing of Maduro. 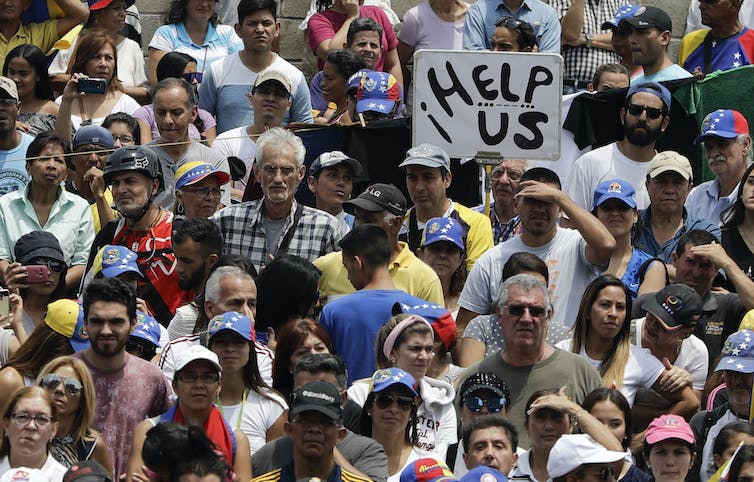 The missile defense system may have been damaged in recent power outages, or left understaffed by desertions from Venezuela’s military.

In a March 29 press statement, White House national security adviser John Bolton called Russia’s military assistance to Venezuela a “direct threat to international peace and security in the region” that will “perpetuate the economic crisis that has destroyed Venezuela’s economy.”

Russian officials retorted that the deployment is part of a prior bilateral arms trade agreement with Venezuela.

“The United States is present in many parts of the world and no one is telling it where it should or shouldn’t be,” said Russian President Vladimir Putin’s spokesman Dmitry Peskov at a March 28 Kremlin press conference.

Venezuela’s opposition coalition and its allies in the U.S. appear to have thought that global rejection of Maduro’s re-election and Guaidó’s assuming the interim presidency — coupled with threats of a U.S. military invasion and sanctions on Venezuelan oil — would lead Venezuela’s armed forces to turn against Maduro. That would then usher in a democratic transition.

Recent events have shown that this strategy was simplistic.

More than 500 Venezuelan soldiers have defected to Colombia and Brazil. But most have stayed loyal, as have the generals who hold high positions in Maduro’s government. And Maduro has shown himself quite adept at using dispersed violence to discourage dissent.

Despite President Donald Trump’s repeated mentions of a “military option” for dealing with Venezuela, it’s become clear in recent weeks that the U.S. has no actual plans for military action. Indeed, it does not have significant military assets in position near Venezuela.

Venezuela’s armed forces are the fifth most powerful in Latin America, according to Global Fire Power, which ranks military strength. It has around 200,000 troops, a volunteer militia, plus paramilitary forces and a fleet of Russian Sukhoi fighter jets.

The presence of Russian troops in Venezuela further complicates any plans for U.S. intervention. Russia is a nuclear power, so incurring Russian casualties is probably too big of a risk for the U.S. to take.

Adam Isacson, a defense expert at the Washington Office on Latin America, a human rights organization, suggests that removing Maduro by force would not only kill thousands of people on the ground, it would likely require tens of thousands of U.S. troops to occupy Venezuela for years in order to stabilize it.

The United Nations estimates that 94 percent of Venezuela’s population now lives in poverty, and a quarter of its people urgently need humanitarian assistance.

Outside of south Florida, where some 200,000 Venezuelan exiles are clamoring for Maduro’s ouster, few Americans would have an appetite for such a prolonged operation.

U.S. economic sanctions — which are now targeting Venezuelan oil — appear to be hurting the Venezuelan people more than Maduro’s government.

That will only make a democratic transition more elusive. Depriving the Venezuelan government of cash and credit will impede it from fixing the electrical grid by preventing the purchase of new equipment. And without electricity and water, Venezuelans, who in their vast majority oppose Maduro, will be concentrating on survival rather than protest.

An international effort led by the European Union, Uruguay, Ecuador and Costa Rica is seeking to negotiate new elections. Calling itself the International Contact Group, this coalition has sent technical teams to Caracas twice to meet with the Maduro government and the opposition.

The International Contact Group has not actually found much interest on either side.

The opposition and its allies in the Trump administration still believe that their strategy of political pressure and economic punishment will lead to the government’s collapse. Maduro, it appears, thinks he can hunker down and wait out the storm.

There is one glimmer of hope.

After years of political wrangling over humanitarian aid, on March 29 the International Committee of the Red Cross announced that it had brokered agreements with both the Maduro government and the opposition. They will allow the Red Cross to distribute food and medicine to Venezuelans, who have suffered severe shortages of both since 2015.

The United Nations estimates that 94 percent of Venezuela’s population now lives in poverty, and a quarter of its people urgently need humanitarian assistance.

The Red Cross deal shows what can be achieved with “satellite diplomacy” — that is, negotiations that engage with rival factions independently rather than requiring them to meet face to face.

This is significant. It is the first time that this diplomatic technique has succeeded in Venezuela’s conflict.

In the best-case scenario, the humanitarian aid agreement will stick. And it could serve as a model for how international actors can facilitate a democratic transition in Venezuela.

This article is republished from The Conversation under a Creative Commons license. Read the original article.